Obi is not prepared for the presidency in 2023, according to a cleric. 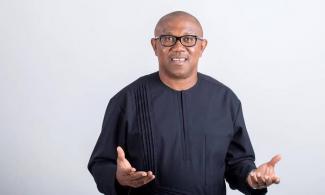 Adewale Giwa, Senior Pastor of Awaiting The Second Coming Of Christ Ministry in Akure, has characterized Labour Party presidential candidate Peter Obi as a businessman unprepared to run Nigeria.Giwa, who was speaking to his church members in Akure, Ondo State, on Sunday, expressly stated that Obi's social media popularity would decrease a few weeks before the 2023 presidential election.Only two candidates from the Peoples Democratic Party and the All Progressives Congress are running in the upcoming election, according to the priest."I've already stated that I don't think Peter Obi is a credible candidate; he's a businessman," Giwa added.He continued, saying:"His popularity on social media will decrease a few weeks before the election." I don't see him around Aso Rock."
Tags
Politics