The funeral of late Mrs. Beatrice Nkechi Ejere over the weekend in Isoko, Delta state, was a cash floodgate, with money raining freely in bundles from those who came to pay their last respects, according to STATEPRESS.

Mrs. Ejere, who died at the age of 76, was the mother of Omoaefe Ejere, the Grand Cubana Hotel's Chief Operating Officer.A church service was performed in her honor at Irri Primary School, and she was laid to rest at the family compound.Omoaefe's friends and acquaintances stormed Isoko with their full chests, opening the spigot of money and raining bundles on the mourning family.They weren't finished yet; they had to touch the lives of some locals who had come to attend the burial.36 Pals Development Initiative, a money gang, drove the town into a frenzy with an unprecedented display of cash, as part of what commentators have dubbed an empowerment burial.According to STATEPRESS, community members who arrived smiled and left with money. Each of the 36 Pals Squad members exhibited their financial muscles as they took the stage to display and release bundles of cash.The event was adorned with high-profile personalities and celebrities, giving it the color it deserved. In terms of the amount of money displayed and the caliber of people who attended, it will be one of the most memorable burial ceremonies in the community.The village took on a new look before the event as people descended from Lagos, Abuja, and other parts of the country.Omoaefe and his siblings have subsequently expressed their gratitude to their associates who came to the town to leave an indelible mark of honor in what appeared to be a tragic situation.He prayed to God to bless them and give them a lasting witness.Omoaefe had lost his father many years before. 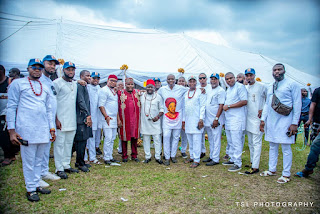 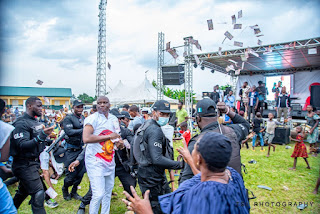 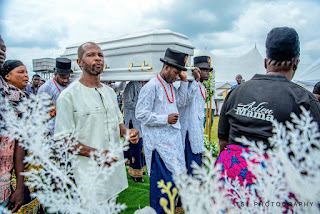 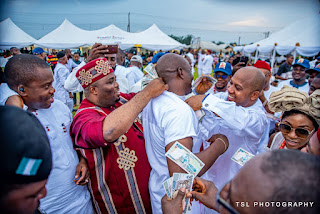